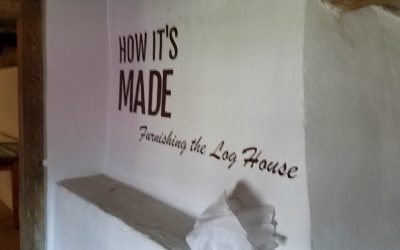 While the museum has been closed these last couple months, we’ve been hard at work on getting ready for the upcoming season. Among the many great fun and educational programs and events is our annual temporary exhibit. This year’s temporary exhibit is called “How It’s Made: Furnishing the Log House.” This Log Blog post will look at the process that went into planning the exhibit—a how it’s made of How It’s Made. The exhibit was partly inspired by probate records, which show an unparalleled look into the things that were in people’s homes at the time of their death. Another inspiration was the fact that while very often people see objects in a museum, they rarely hear about how they would have been made—an experience which would have been very different for people living here in the Log House in the eighteenth century. The collection of eighteenth and nineteenth century domestic items that housed at the Morgan Log House is very expansive, including many examples of textiles, furniture, books, and ephemera. A set of criteria was selected for the objects:  they had to tell a story that connected the Morgan Log House to the wider world and they had to have a connection to the modern day. Choosing objects is the hard part of the exhibit—it’s where part of the curating comes in. The boundaries of the historical story that you want to tell with an exhibit are set based on the objects that are inside. “How It’s Made” tells a story of domestic life, but domestic life for the families that would have lived here. Farm tools are... END_OF_DOCUMENT_TOKEN_TO_BE_REPLACED 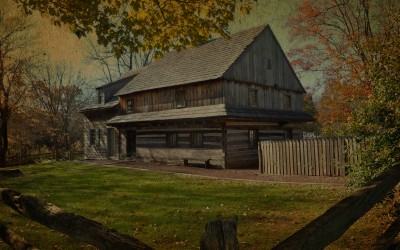 From the New Executive Director

I thought I would use my first Log Blog post as a way to introduce myself to you, the Morgan Log House community. I’ve only spent a short time here so far, as I started working with the new year. Already, though, I can tell that this is a very special place and am excited to be a part of it. The history of the log house itself is fascinating and is connected to the fabric of our nation. The local story is the story of huddled colonists, scrappy revolutionaries, and those seeking opportunity on the shores of the New World that helped make our country what it is today. I’m excited for a chance to delve deeper into that history and to share it with the community. I’ve also been impressed with the people I’ve encountered here: volunteers who dedicate so much of themselves to making sure that the Log House continues to be a place where history comes alive. I can already tell that the Morgan Log House could not exist without them. Nor could it exist without the community that it serves, which have given generously throughout the organization’s history. I’m looking forward to working with the Log House’s volunteers and the community, and getting to know everyone. The Log House is really a family: and I’m glad and proud to now be a part of it. I’m coming to the Log House from the Red Mill Museum Village where I served as Curator of Public Programs before becoming Assistant Director. Additionally, I come with a newly minted Masters Degree in History from Lehigh University, where... END_OF_DOCUMENT_TOKEN_TO_BE_REPLACED 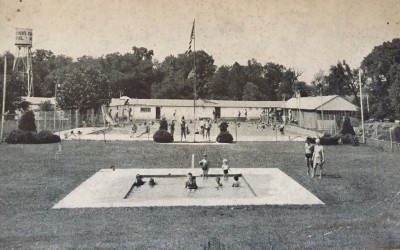 The Morgan’s were pinnacle in the settling of Towamencin Township by 1727, important in helping to found Gwynedd Quaker Meeting by 1712, and also were important in helping to settle early American through their grandson, Daniel Boone’s role. To honor to highlight the great role this fascinating family played locally, regionally, and nationally, we are hosting a Morgan Reunion Weekend July 16th-17th. Throughout the weekend we will be hosting onsite Welsh-heritage demonstrations and workshops, from cooking to Welsh language introduction we will bring the Morgan’s heritage to life.  We also are partnering with regional sites and organizations who will be offering special activities or tours for that weekend as well. Full details of the entire weekend’s events both onsite and offsite can be found on our “Event” tab under July 16th & 17th.  Members of the Morgan Log House are Free. To join as a Member, follow our Membership section under the “Join” tab on our website. We also have details on special lodging and dining offers for those in town for the Morgan Reunion Weekend. Contact Sarah at sdisantis@morganloghouse.org and ask to be placed on the email list for notifications about... END_OF_DOCUMENT_TOKEN_TO_BE_REPLACED 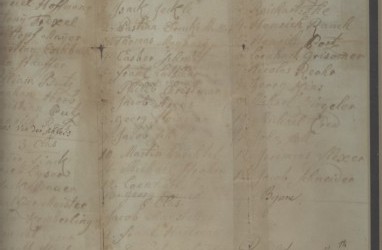 In Search of History

From time to time, even the closest knit families can have arguments and falling outs. Have you ever wondered if such a thing was possible in the 18th century? What if a Father and Son had different views on moral obligations and duty to one’s country? How do you continue to live amicably under the same roof with these differences? Well, that is just what Yellis Cassel was faced with. In 1778 Yellis Cassel, owner of the present Morgan Log House, was the Minister for Lower Skippack Mennonite Church and signed the non-combatant list for the 1778 Towamencin muster rolls. Like Quakers, Mennonites were pacifists by nature of their faith and Yellis joined many of his local Mennonites against the war between the Colonies and Great Britain. During this time, the common family practice was what the patriarch said, went. And yet, this respected Minister had what could possibly be described as a big family issue. His middle son, Christian, did not follow his father in signing the noncombatant list. Instead, we find Christian Cassel joining Captain John Springer’s Company of Militia for Towamencin Township. This makes us wonder about the Yellis and Christian relationship. What was the conversation like around the dinner table? Was Yellis able to respect his son’s different view? What motivated Christian to go against his Father’s ministry? As we delve deeper into the Cassel families history we hope to uncover this answers. Check back regularly as we learn... END_OF_DOCUMENT_TOKEN_TO_BE_REPLACED
Next Entries »