History in Your Closet: Military Might and Personal Collections 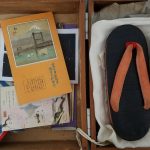 This May 27th, the Morgan Log House will be holding its annual Military Might day. The event is meant to educate and provide a way to remember the sacrifices that Americans, throughout our nation’s history, made for their county through the nation’s various wars, from the American Revolution to the present day. It features reenactors, demonstrations, and artifact displays.

Many of the artifact displays are from personal collections. I thought, as the new Executive Director here, I would use this Log Blog to talk about a family collection of my own, my thoughts as I went through it, and what people reading this can do with their important, personal and family collections.

My grandfather served on a destroyer escort, the U.S.S. Gosselin, during the Second World War in the Pacific. The ship was launched in 1944 and was named after Ensign Edward W. Gosselin, who died on the U.S.S. Arizona during the attack on Pearl Harbor.  It was part of a convoy throughout the Pacific, where it shot down Japanese planes off Okinawa and saved survivors from the wreckage of kamikaze destroyed ships (which my grandfather always talked about with a sense of dread that only comes from horrific lived experience). The Gosselin was one of the first ships into Tokyo Bay before the surrender, having carried press and Naval photographers into Tokyo on August 27, 1945. On September 2, the Gosselin carried press representatives to the U.S.S. Missouri for the surrender ceremonies that ended the War. Later, the Gosselin and its crew liberated and evacuated prisoners of war from the Omori Prison Camp. My grandfather oversaw the gyroscope and other navigational equipment on the ship.

The personal collection I have is a series of objects that my grandfather stored in a wooden box that he found in Tokyo. He painted Mt. Fuji on the box, as well as the locations that he had visited there (he was an artist).  Inside the box is all sorts of things from his time in Japan—photographs, maps of Tokyo, Japanese flags, Nazi armbands, Japanese money from before and during the occupation, a pack of Japanese cigarettes. I had gone through this collection before—my grandfather had brought out many of the objects since when I was a little kid and showed me them, talking about his experiences during the war, Japan before and after the surrender, the sound of a kamikaze plane flying over his ship and hitting another nearby. Looking through them now, though, I am reminded of who broader things—of my dead grandfather who I miss and of what the lived experience of being on one of the first American ships into Tokyo would have been like. It most definitely provides a personal collection to events that happened many decades before I was born.

As a historian, I think I’m used to talking and thinking about historical events—but it’s another thing to encounter those events through objects that were collected by a family member who was there. For those of us who were not alive for it, it’s impossible to imagine what the lived experience of the second World War was like—the world was ripped apart and saw unheard of devastation. We know the stories from the people that were there and the history books—but it’s almost too big to imagine. That’s the power of personal collections: they directly connect us to major historical events through people we know, helping us to somewhat understand what the experience was like. They remind us that the people that were there are our family members, regular people who witnessed the world change and history being made.

Many of us have personal collections, be they from a family member who had been to war, a relative’s papers, or photo albums. These are important historic documents and should be saved for future generations—they are a way to tell and preserve our family stories. When a museum takes care of objects in their collection, certain needs are met—objects are handled with care (gloved hands, careful fingers), they are kept out of direct light, rapid climate changes are avoided. These same considerations can be made at home to make sure that personal collections. Oils from hands and perspiration can damage materials—ideally gloves should be worn when handling historical materials. At the very least, hands should be washed regularly and often during the process. Light is, perhaps, one of the biggest enemies to preservation—it can lead to rapid fading and discoloration. This is particularly evident for photographs, dyed textiles, and pigments. Exposure to it should be avoided. Rapid temperature changes can also damage objects in your care—changes in temperatures too quickly can lead to undo stress on an object. Ideally, temperature and humidity should stay the same. For those of us that don’t live in a perfectly climate controlled home, storing your collection in a cool, dry, dark space should make sure that they will stay around for a long time.

I’m looking forward to this year’s Military Might event because it lets us tell the story of regular Americans who took part in the broader story of history—in wars that were much larger than them and earth shaking events. Seeing artifacts from those wars, and hearing personal stories and recollections, help bring those wars to life and help us appreciate the lived experience that our ancestors went through for our country. It’s my hope that the event will provide a place for our visitors to learn about the history of the United States at war, to reflect on the sacrifices made for their freedoms, and to think about our national legacy that we all have inherited.

Military Might will be held at the Morgan Log House on Saturday, May 27, 2017 from 10 a.m. to 3 p.m. it will feature artifact displays, demonstrations, and reenactors. It provides a great experience for the public to learn about America at war and to interact with the past.