Dendrochronology: How Old is It?

When looking at an old building, it can be difficult to determine the age of a building. The building’s construction materials and decorative elements like trim, mouldings, and windows can provide a date range of of when it was built. Some buildings like stone farm houses, churches, or public buildings may have dates marked on their exterior. Cornerstones, carvings on mantle pieces or exterior brick walls might record a specific year.  Another way to date a building is through paper records like deeds and local government property records, although these may not be accurate, and typically are for more recent properties.  Most buildings do not have visible dates and many have been altered to meet the needs of their owners, so that an accurate date is difficult. Another way of dating a building is through dendrochronology analysis. This is the case for the Morgan Log House. Originally, it was thought that the current house dated to the late seventeenth century and was occupied by the Morgan family who owned the land. However, a dendrochronology study was done in 2000, which resulted in the determination that the house was likely constructed in the 1770s, likely by the Yeakle or Cassel families, who owned the property after the Morgan family. These kinds of studies can provide insight into a building’s age if it is unknown by paper records. Many people may not be aware of this kind of study so the museum thought a blog post might enlighten those interested! Dendrochronology is the study of trees and their rings to determine the age of a tree when it was felled or... END_OF_DOCUMENT_TOKEN_TO_BE_REPLACED 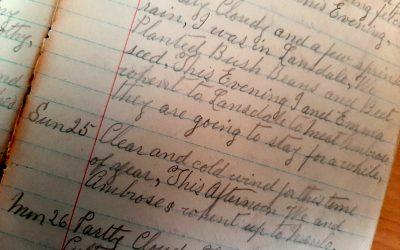 Cover of Record Book, 1920 and 1923 Entries from William Leister’s diary, 1920. William Leister’s dairy, open to January, 1921. In 2018, Brian Hagey, the author of Paper, Quill and Ink: The Diaries of George Lukens, Towamencin Township Quaker, Farmer, Schoolmaster, Abolitionist; with A History of Towamencin Township, donated family diaries of local resident and farmer William Graber Leister to the museum’s collection. We were put in touch with Mr. Hagey after staff was researching the agricultural history of the township. Mr. Hagey generously donated these diaries to the collection and they have given the museum some insight into the local agricultural industry, but also into daily life in Towamencin Township in the early twentieth century. They will serve as the basis for our upcoming 2020 exhibit, “A Day in the Life of a Farmer” which will look at local farming in the early twentieth century through the eyes (and pen) of William Leister. According to federal census records, William Graber Leister was born June 9, 1860 in Gwynedd Township, Montgomery County to parents Andrew and Louisa or Lucy Leister. In 1870, the family moved to Towamencin Township and by 1880, William was married to Mary Wagner Richard Leister (1854-1904) and working as a farm hand on Henry Bower’s farm within the township. Eventually, William acquired his own farm, the property later known as Schwenkfeld Manor at the southern corner of Weikle and Allentown roads in Kulpsville. William and Mary had six children: Morris (1880-1947), Emma (1882-1900), Allen (1884-1964), Ella (1888-1951), Ambrose (1891-1964), and Edna (1895-1964). After his wife’s passing in 1904, he married widow Emma Wagner Richard Henning... END_OF_DOCUMENT_TOKEN_TO_BE_REPLACED

This blog post is an adaptation of the presentation for the Morgan Log House’s History Happy Hour on Friday, July 12, titled “Weird Cures and What They Do.” Our History Happy Hours are tied in with our temporary exhibit, “Leeches, Purging, and Magic: the Care and Healing of the Colonial Body,” on display at the Morgan Log House until the end of December. Our third History Happy Hour will be on Friday, August 16 at 7 p.m. and will look at folk magic and healing. You can purchase tickets for it here. Colonial Medicine: a Very Brief Introduction First a note on colonial medicine. Much of eighteenth century medicine was based on the idea that illness needed to be removed from the body. This could happen through bloodletting, forced vomiting, blistering, enemas, sweating, or by contact with objects that could transfer sickness from a person’s body. Medical care could be done by a wide array of people. Medical doctors received training, but encountering one was rare outside of cities. Other medical practitioners ranged were someone who could read a book and hold a knife, someone who worked with a doctor for a season, a clergyman, a midwife, an herbalist, a parent (most often a mother), or a practitioner of magic.  This blog post looks at some of the more colorful cures that were attempted. It’s important to remember that, while from our modern understanding they might not medically work, for people in the eighteenth century these were viewed as viable options for medical care. Many had aspects that worked (or at least alleviated symptoms). Others may have worked because... END_OF_DOCUMENT_TOKEN_TO_BE_REPLACED

We Love Our Volunteers!

The Morgan Log House has had strong volunteer support since the 1970s when it was saved from suburban development. Township officials and local leaders and residents raised funds and awareness of the historic house to allow for its 1973-1976 restoration. The house later opened as a historic house museum. Volunteers have been involved with events and interpreting the house for visitors for over 40 years. Volunteers range in age from students to seniors citizens with a wide background from nursing to education. Our annual events Dirty Attic, Creepy Cellar, Military Might, Tavern Night, Mayhem, and Candlelight tours have been local favorites that are strongly supported by our volunteers. Volunteers are involved in many aspects of the museum including the gift shop, museum interpretations, behind-the-scenes of setting up and tearing down events, assisting with new exhibits and collections.  The museum has also had involvement with student internships and scouts. Students have worked with staff to scan old slides into the museum’s digital image collection, organize our library, and help us with our museum archives For several years, Boy Scouts have visited the site, taken tours, and completed their Eagle Award projects. These projects included completion of the front stone walkway, a side walkway, signage, painting, and a hops garden. We are currently working with the Eastern Pennsylvania Girl Scout Council to involve local Girl Scouts with the museum. If you are interested in participating and helping the Morgan Log House with its mission, feel free to contact us via email info@morganloghouse.org, phone (215)368-2480, or stop in during operating hours, Thursday through Saturday 10am to 3pm and Sunday 12pm to 3pm... END_OF_DOCUMENT_TOKEN_TO_BE_REPLACED

Maybe we’re a little biased, but we think that the Morgan Log House is a local historic gem just waiting to be discovered! Need convincing on making a visit? Here are just a couple of reasons why: 1.) A Hidden Gem with Unheard Stories We all know the big stories of American history: of founding fathers in powdered wigs fighting for freedom—but what about everyone else? What happened in your own backyard? The Morgan Log House shows the Revolutionary era in ways you might not have heard: the experiences of local Mennonites, of immigrants, and of the Welsh who settled here. 2.) History is Exciting! Think history is just a boring subject you slept through in school? Think again! History is connected to our world in more ways than we realize—why is that road called that? Why do we do the things we do? People cooked on what? Went to the bathroom where? We live in the legacy of history—explore it! 3.) History is Fun for All Ages Exploring a local historic site like the Morgan Log House can be fun for each member of your family. Mom interested in architecture? The Log House is a fascinating and unique eighteenth century home. Dad learning how to cook? Learning about hearth cooking might be a great inspiration to get our and grill.  Kids hate their chores? Learning how eighteenth century kids did their chores might make that all better—and give everyone some laughs! It’s a great learning experience to take part in as a family. 4.) The Morgan Log House Has Fun Holiday Programming The Morgan Log House has all... END_OF_DOCUMENT_TOKEN_TO_BE_REPLACED 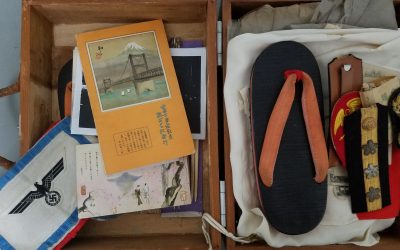 History in Your Closet: Military Might and Personal Collections

By: Tim Betz, Executive Director, Morgan Log House, May 2017 This May 27th, the Morgan Log House will be holding its annual Military Might day. The event is meant to educate and provide a way to remember the sacrifices that Americans, throughout our nation’s history, made for their county through the nation’s various wars, from the American Revolution to the present day. It features reenactors, demonstrations, and artifact displays. Many of the artifact displays are from personal collections. I thought, as the new Executive Director here, I would use this Log Blog to talk about a family collection of my own, my thoughts as I went through it, and what people reading this can do with their important, personal and family collections. My grandfather served on a destroyer escort, the U.S.S. Gosselin, during the Second World War in the Pacific. The ship was launched in 1944 and was named after Ensign Edward W. Gosselin, who died on the U.S.S. Arizona during the attack on Pearl Harbor.  It was part of a convoy throughout the Pacific, where it shot down Japanese planes off Okinawa and saved survivors from the wreckage of kamikaze destroyed ships (which my grandfather always talked about with a sense of dread that only comes from horrific lived experience). The Gosselin was one of the first ships into Tokyo Bay before the surrender, having carried press and Naval photographers into Tokyo on August 27, 1945. On September 2, the Gosselin carried press representatives to the U.S.S. Missouri for the surrender ceremonies that ended the War. Later, the Gosselin and its crew liberated and evacuated prisoners of war... END_OF_DOCUMENT_TOKEN_TO_BE_REPLACED
« Older Entries