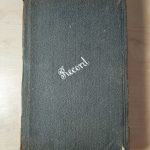 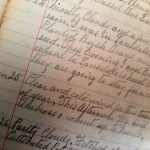 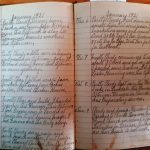 In 2018, Brian Hagey, the author of Paper, Quill and Ink: The Diaries of George Lukens, Towamencin Township Quaker, Farmer, Schoolmaster, Abolitionist; with A History of Towamencin Township, donated family diaries of local resident and farmer William Graber Leister to the museum’s collection. We were put in touch with Mr. Hagey after staff was researching the agricultural history of the township. Mr. Hagey generously donated these diaries to the collection and they have given the museum some insight into the local agricultural industry, but also into daily life in Towamencin Township in the early twentieth century. They will serve as the basis for our upcoming 2020 exhibit, “A Day in the Life of a Farmer” which will look at local farming in the early twentieth century through the eyes (and pen) of William Leister.

According to federal census records, William Graber Leister was born June 9, 1860 in Gwynedd Township, Montgomery County to parents Andrew and Louisa or Lucy Leister. In 1870, the family moved to Towamencin Township and by 1880, William was married to Mary Wagner Richard Leister (1854-1904) and working as a farm hand on Henry Bower’s farm within the township. Eventually, William acquired his own farm, the property later known as Schwenkfeld Manor at the southern corner of Weikle and Allentown roads in Kulpsville.

A local farmer, William kept five diaries spanning the years: February 1911 to August 1913, August 1913 to August 1916, April 1920 to December 1923, January 1924 to July 1927, and October 1927 to October 1934. During these years, he kept a daily account of weather conditions, farm activities, and local events. Although brief, the entries provide insight on rural agrarian life during the first third of the twentieth century. He recorded the wind, rain, and snow amounts. He also detailed the many agricultural activities performed on his farm and how his adult children, and his extended family of cousins and neighbors aided him. This exchange of labor was a continuation of a tradition from the earliest farms in the colonies where locals gathered to assist each other with farm tasks, especially at seeding, cultivation, and harvest times. Local events like births, deaths, farm sales, and church activities were also recorded; however national events were rarely mentioned. Although there are chronological gaps between these diaries, like the gap coinciding with World War I, William maintained a daily record of his life, writing it appears in the evening around 8 pm. William chronicled his life up to the mid 1930’s after his second wife’s death. He died March 1, 1937 at the age of 76 years. He is buried at the United Church of Christ Cemetery in Kulpsville.

Want to help us make “A Day in the Life of a Farmer” a reality? Sponsor the exhibit by donating here.